×
Band
Go to content
Richard Hecks and His Nouveau Flamenco Band Luna Blanca
Luna Blanca, based in Bocholt, Germany, was founded at the beginning of the millennium by acoustic lead guitarist Richard Hecks. The other mainstay of the group is pianist Helmut Graebe, who joined the group just before they recorded the first album, and now co-writes the music with Hecks. Both on record and in concert they add other musicians as needed to create their sound with drums, percussion, bass, one or more acoustic rhythm guitars, organ, occasional vocalizing, etc. Since the third album, Hecks and Graebe have been joined by rhythm guitarist Bino Dola (a flamenco player much respected throughout Europe) and Clemens Paskert (who adds bass, percussion and additional keyboards).
"El Dorado Best World Album 2012" (ZMR Music Awards, New Orleans May 2013): 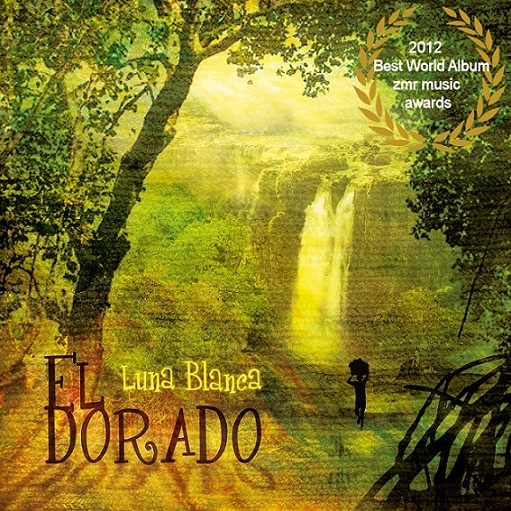 Helmed by classical guitarist Richard Hecks, Luna Blanca has become one of the most popular nouveau flamenco groups in the world. Their 2012 release, El Dorado, was the recipient of the Best World Album award by Zone Music Reporter for that year. According to Richard Hecks, listening to El Dorado is “a musical adventure that simulates a journey and search through South America looking for riches, but encountering both bandits and the good native people, music, rivers to cross, and the beauty of a new land including warm breezes and sunsets.  El Dorado also is a symbol of everyone’s search in life for love, wealth, accomplishment and happiness.”
For example, on El Dorado there are some noteworthy new additions to their sound -- electric guitar and sound effects on “Desperado,” blues harp on “Medianoche” and “Rio Mamoré,” and honky-tonk piano on “El Dorado,” as well as some instrumentation they occasionally use such as trumpets (on “Los Ojos” and “Kolibri”) and string orchestration (on “Puesta del Sol”).  Hecks explains, “The CD starts with ‘Los Ojos,’ the eyes, looking off into the distance where the explorers are headed, and the tune includes Clemens laughing with joy at the exciting and dangerous trip to follow.  Some of that danger appears in the tune about a ‘Desperado’ who is eventually shot down with the sounds of a horse whinnying and bells tolling.”  The people of South America love to dance and Luna Blanca likes to include a rumba tune on their recent recordings which led to the upbeat and highly-melodic “Guapa.”

In addition to outstanding performances, this music overflows with joy, adventure, and a strong sense of fun. Guest artists are Davina-Carolin and Gundy, the singing mermaids on the only track that includes vocals. Through careful sound engineering, each song tells a mystical story with various details.

Pirates Bay begins with “Carolina,” a wonderful opener with a swaying Latin rhythm that evokes images of warm, tropical breezes, wide sandy beaches, and plenty of relaxing sunshine. “Pirates and Mermaids” is a track with female voices taking the role of sirens luring the sailors. Catchy rhythms, more beautiful guitar playing, and the haunting vocals make this one a stand out. “Hopeless Chance” ends this excellent album with a poignant, wistful guitar ensemble piece that touches the heart.

Expanding on the idea that instruments can be used to capture a particular mood, Luna Blanca continues to captivate listeners and use carefully crafted melodies to evoke emotional response. The music of Luna Blanca has the ability to reach listeners of all ages through its energy and attention to detail.
Available on all online music vendors including iTunes, Amazon, and CD Baby, the music displays Luna Blanca's knack for blending the world of fantasy with the power of emotional physical instrumentation. For more information on Richard Hecks and his Nouveau Flamenco Band, Luna Blanca, check out their website at www.LunaBlancaMusic.com.
Richard plays all his music on a Hermann Hauser III Dream guitar.